Forget grand gestures and costly cards, flowers and gifts – rustle up a tasty treat in the kitchen this Valentine’s Day and you’ll be smashing it out of the park.

There’s nothing wrong with spoiling somebody, but it doesn’t have to cost the earth. The simple things can be just as effective  – even more so in actual fact. Whether it’s beans on toast by candlelight or full mashings with a splash of fizz, showing you care never tasted so good…..Try these romantic recipes and nail it this Monday! 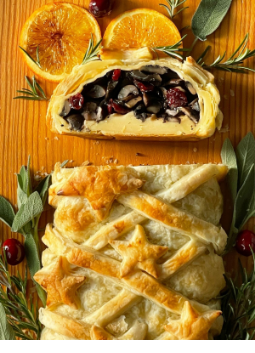 If you’re looking for a veggie option for your next mid-week meal, this mushroom wellington recipe with truffle oil and turmeric coconut oil from Zing Foods is a must-try.

It can be easily prepared in under 1 hour and serves 4.

If you’re looking for a quick and easy veggie breakfast or light bite, incorporate 2022’s ingredient of the year into your diet. This creamy mushroom on toast recipe with turmeric coconut oil from Zing Foods can be easily prepared in 15 minutes! 1. Place the cashews in a heatproof bowl and cover in boiling water. Leave to soak for 30 minutes until the cashews have softened and then drain.

2. Meanwhile, heat a frying pan with the olive oil over a medium heat before adding the onion and garlic. Sauté for 10 minutes or until the onions are soft and translucent.

3. Add the mushrooms and rosemary, mix well and leave to cook for 10 minutes or until the mushrooms have softened and reduced, stirring occasionally. Once cooked, set aside.

4. Cook the ZENB yellow pea fusilli according to packet instructions.

5. Make the creamy gravy by adding the softened cashews, milk of choice, silken tofu, lemon juice, tamari and nutritional yeast to a high-powered blender and blitz until silky smooth.

6. Add the gravy to the mushroom and onion mix and stir through. Season with salt and pepper.

7. Remove from the heat and stir in the spinach until wilted.

8. Mix in the pasta, adding a little of the pasta water if the sauce is too thick.

If you are looking to go that extra mile and make this dish extra special, why not try the following: 1. Preheat on oven to 180oc.2. Place all the pasta sauce ingredients on a baking tray (except the milk of choice), toss until combined.

2. Roast in the oven for 40 minutes or until starting to caramelise, turning the vegetables halfway.

3. Once the vegetables are roasted, transfer the sauce to a blender, add the milkand blitz until silky smooth.

4. To make the garlic breadcrumbs, add all the ingredients to a small non –stick frying pan (except the parsley) and fry on a high heat until golden brown. Stir frequently to avoid them burning. Mix through the herbs once golden brown.

5. Cook your ZENB penne pasta according to packet instructions. Stir through the beetrootsauce and serve topped with crumbled vegan feta ‘cheese’ and the crispy garlic breadcrumbs 1. Preheat the oven to 200ºC fan. Roughly dice the butternut into cubes, place on a baking tray, drizzle in olive oil, salt, dried rosemary and thyme, toss to coat, then pop in the oven for 20 minutes.

2. Meanwhile, chop the leeks and mushrooms, chop two of the sage leaves then add all to a frying pan with a drizzle of olive oil, season heavily with salt and pepper and fry for 5 minutes. Once the butternut has cooked, add to the pan with the leeks then add the vegan cream, tossing to ensure everything is coated. Turn off the heat and leave to cool.

3. Remove the pastry from the fridge and roll out onto a flat surface. Fold the sheet of pastry in half, then cut a circle shape (this will form the base and the dome on top) place one of the circles on a lined baking tray, then spoon on the filling leaving a 2cm gap around the very edge so you can seal the pie. Once you’ve added the filling to one half, add the other circle of pastry on top and pinch the edges together, you can create a pattern or simply overlap and pinch with a fork.

4. Brush the melted butter and tamari mix over the pie crust, score with a pattern then place in the fridge to cool for around 5 minutes (enough time to preheat the oven to 200ºC fan). Pop in the oven on the middle tray for around 25-30 minutes or until the pastry has turned golden and flakey. Enjoy with gravy or with steamed veggies.

Finely chop the onion and mushrooms separately, using a food processor if necessary. Cook the onion in the butter, for 5 minutes, until softened. Add the mushrooms, season with sea salt and freshly ground pepper. Keep cooking until there is no moisture left from the mushrooms. Set aside to cool.

Turn up the heat, season the steak with sea salt and freshly ground pepper, then sear in the same pan, for 1 minute on each side. Set aside too cool.

Place the smaller ovals onto a baking sheet and place the steaks into the centre of each. Spoon over the mushrooms, keeping them on top of the steak. Top with the Cambozola.

Brush a little of the beaten egg around the exposed pastry, then place the second piece of pastry over the top. Press around the edges then trip off the excess pastry and seal the edges with a fork. Score the tops with a crisscross pattern.

Brush all over with the beaten egg and use a sharp knife to cut small holes into the top of each Wellington. Beat together the flour, cocoa, sugar, egg, butter, and vanilla. Mix in a splash of milk if the mixture seems a bit thick. It should be a dropping consistency. Divide equally between the ramekins.

Cut the bottoms off the pears so that they will sit flat, then push into the centre of each of the ramekins.

Bake for 20-25 minutes until the pudding has risen and is cooked through.

To make the Cambozola chocolate sauce, chop the Cambozola into small pieces and place it into a small pan with the chocolate and cream. Slowly melt over a low heat, whisking until combined. Remove from the heat and pour into a jug to serve.

The Power House Herb You Need in Your Skincare Routine