The Culture and Heritage of Ajman can be found through it’s entirety. The United Arab Emirates was formed 50 years ago and while many changes have taken place over the last half a century, the emirate of Ajman has retained its rich cultural traditions and preserved its heritage.

You can discover Ajman’s fascinating history at its museums, castles and forts, and experience Emirati culture by meeting the people or exploring a souq. You can even witness the local passion for Arabian horses at a stud farm.

Historically, wooden dhows, traditional arab sailing vessels, played a vital role in fishing, pearling and trading across the region. Ajman has been famous for the quality and expertise of their handmade dhows for centuries and you can still visit one of the worlds largest dhow-building yards in Ajman today. 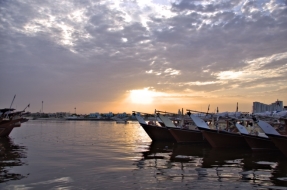 The Heritage district is a unique tourism destination showcasing the UAE’s heritage and rich cultural history. The Heritage District is home to antiquities and ancient trees, offering a truly remarkable and well-rounded cultural and recreational experience. The district houses Ajman Museum.

With a fascinating collection of artefacts housed in a beautifully restored fort, Ajman Museum is one of the most visited historical attractions in the emirate. It is the foremost museum illustrating life as it once was. The 18th-century fort served as the ruler’s residence until 1970, before it was converted into a museum a decade later.

The exhibits offer a compelling glimpse of Ajman’s past, from centuries-old manuscripts and weaponry to models of wooden dhows and ingenious irrigation systems. One of the most notable displays is an excavated cemetery discovered in the Al Muwaihat area, which features pottery and funeral jewellery dating back as far as 3000 BC. A section is devoted to the pearl trade that once dominated the region, while the fort itself is a perfect example of traditional Emirati architecture.

Meanwhile, only about an hours drive away, at the inland enclaves of Al Manama, east of Ajman, and Masfout, in the south of the UAE, you can explore castles and forts, and understand the essence of local life in laidback villages and towns. 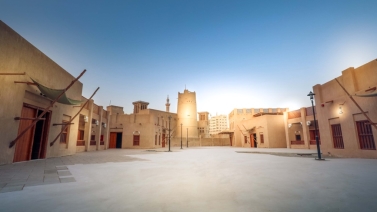 With its majestic mountain backdrop, the agricultural enclave of Manama is known for its pleasant scenery, wild honey and historic fortresses.

One of these impressive forts houses the Al Manama Museum which highlights the region’s heritage, traditional architecture and crafts. It’s a 20th century fort in the enclave of Manama, 70km east of Ajman city, that’s been converted into a small museum. There are seven large rooms displaying a collection of weaponry, Bedouin jewellery and handicrafts.

The fort was built at the time of Sheikh Rashid bin Humaid Al Nuaimi, who ruled the emirate from 1928 until 1981. It features a guard’s tower and well, and is surrounded by palm trees, irrigated by the old falaj system that channels underground water from the mountains. 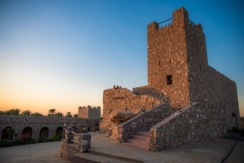 Cradled by the Hajar Mountains, the tiny landlocked enclave of Masfout is a hiker’s dream and makes for a refreshing change from the city.

Perched on a mountaintop and built with stones, mud and local timber, the 19th-century Masfout Castle was once the first line of defence against bandits heading to neighbouring Oman. The tower-shaped castle was restored in the late 1940s at the behest of the late Sheikh Rashid bin Humaid Al Nuaimi.

Known for its fertile agricultural land and high-quality marble, Masfout is in the south of the UAE near Hatta, a 90-minute drive from Ajman city. Its elevated altitude brings cooler temperatures and the rugged backdrop attracts outdoor enthusiasts and nature lovers. The rocky countryside surrounding the town is ideal for walking, mountain biking, picnics and wadi exploration. 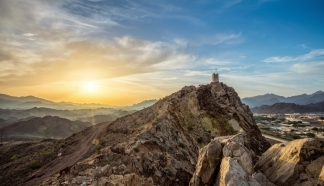 For your holiday to Ajman, British Airway Holidays currently have the following offer: